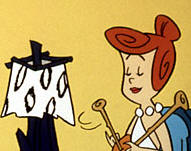 My earliest memories of knitting are from the Flintstones. I watched a lot of Flintstones. It came on during lunch time and I was close enough to the school to come home to watch it.

In one episode, Wilma knits. She says aloud, “Knit 1, Purl 2”. Did I know what that meant? No. For that matter, I don’t know if this memory is real or if I’ve meshed Flintstones with another cartoon memory! But for now, it’s from the Flintstones.

I remember wanting to know how that worked. Her needles would move, yarn would be knitted into some type of sweater, and all you had to do was say “Knit 1, Purl 2”.

Didn’t work when I tried it. I remember wrapping yarn around the needles and clicking them together. I don’t really think I was trying to knit; my seestair and I were probably playing.

Knitting role-playing. Wow, how lame does that sound?

Just so I don’t sound completely emasculated, I did play with a lot of Star Wars. 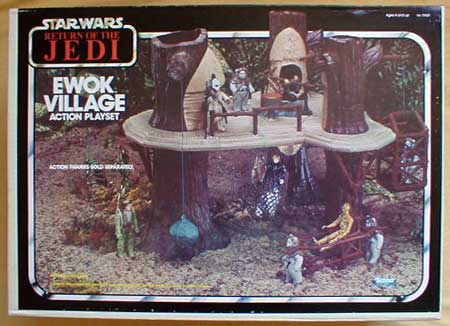 I wanted an AT-AT. I got this. Admittedly, I asked for this and it was AWESOME.

Fast forward more years than I want to admit, and my wife shows me the knit stitch. It’s a lot simpler than casting on. I just slip the needle through, loop around, and pull out!

HUZZAH! I can do this!

With the scrap yarn she started me off on, I begin to knit. When I get to the end, I turn around and start again. It’s a bit like typing. Well, not really, I don’t turn the typewriter around when I’m done.

One minute, you are happily going through the stitches of life, and before you know it, someone is mad at you, it’s your fault, you don’t know why, and you’re in a tangled mess.

Posted on December 25, 2012, in knitting, project and tagged project. Bookmark the permalink. Leave a comment.