I will not bore you with another three entries on my next three Totoros.

Rest assured, I will find something else equally as boring to exact upon you.

I’ve been searching for eyes. It’s hard to find them. I don’t want the adhesive ones; I want ones I can sew on. And I want them cheap. And I want them with black pupils and I want white … uh… whatever the white part of the eyes are called. And while I’m at it, I want a coconut cream pie as well.

I went on a quest for eyes. I stopped off at Michaels to find some eyes. They didn’t have any. Why is this so hard? All my Ravelry projects are stuck on 90% loading because I don’t want to stitch in eyes; I just want to sew them on. *sigh*

Of course, I make it sound like this is the easiest thing in the world. I’ve never sewed on eyes before. I hope it’s easy.

Michael’s did have the above book. I paged through it. I wonder how it works, knitting someone’s intellectual property.  Does she have to pay royalties? If I made a book of nerdy dolls, I wonder what I’d have to do? Other than pay lots of money, which I don’t have. So much for that idea.

I also want a handy knitting container. I’ve upgraded my little knitting case. The previous was thin and flimsy and the needles started poking through and stabbing me

I asked my eldest daughter for a pencil case she wasn’t using and she had this purple one. It was a good size and it held all my knitting gear. I was terribly pleased. How awesome would it be if it had pockets so that I could store the smaller things inside of it?! 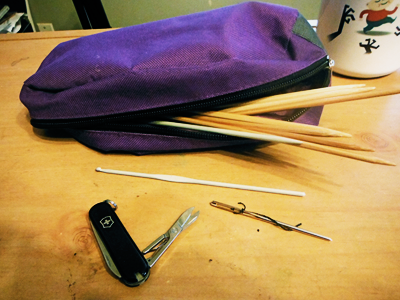 I’ve resorted to stealing from my children…

I take this everywhere with me now. I have two sizes of DPN’s in there (double pointed needles), a crochet hook, a darning needle, and the swiss army knife that has the mini scissors.

I DEFINITELY can’t go on planes now. Add just one bottle of water and I’d be the next Bin Laden.

This brings us to geeky story time. There is this Infocom Text game based on Hitchhiker’s Guide To The Galaxy. In it, you play Arthur Dent, and you meet up with Ford Prefect who has a satchel. Whenever you tried to look in that satchel, he wouldn’t let you.

I remember being fascinated by what was in the satchel. WHY? I have no idea. It sticks with me to this day.  If I see a small bag or satchel, it is Ford Prefect’s satchel and I want to know what’s inside it.

The sad thing is, there wasn’t really anything in that satchel that was really important. The only thing I can recall was a cotton ball. It was kinda disappointing.

A still from the knitted sequence of Hitchhiker’s Guide To The Universe. I appreciate it a lot more now.

And DO YOU KNOW WHAT’S EXCITING?

I BOUGHT MY OWN YARN! HUZZAH!

On my search for eyes, Dove (my pet name for my wife) has been taking me to yarn stores. We went to one which had yarn, but no eyes. So we went to DeSerres. My wife likes to paint and if DeSerres were a man their adulterous nature would be so tumultuous they’d make a movie out of it. And it would star Angelie Jolie. I hope I get cast as Jackie Chan.

Can you see Jackie Chan doing this? I can’t.

In the end, I have projects #4 – #8 almost complete. They aren’t done because I don’t have eyes. I can’t find any to buy. That are cheap. And are the right type. And that I can sew on.

Posted on January 4, 2013, in knitting, project and tagged totoro. Bookmark the permalink. 5 Comments.