I have tiny metal DPNs. I didn’t know the size so I checked the package and that’s when I saw the word:

How awesome is that? If I got to say THAT instead of DPN’s, I’d be saying it any chance I GOT!

“Knitting again?”
“Yes! With my STRUMPFSTRICKNADELNS!” 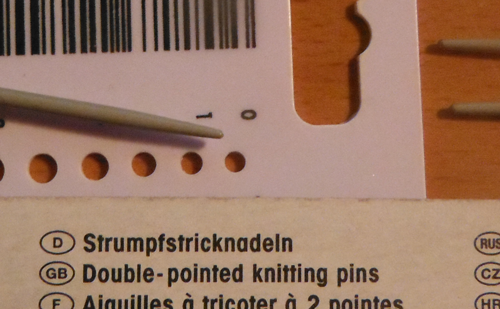 German words are so fun.

ANYWAY, why bring up the size of the needles? Well, I’ve been working on the bodies for my Yakko Finger Puppet.

Everything I make is misshapen. I should have been named Dr. Frankenstein. And then I could say STRUMPFSTRICKNADELN!

The first light blue one was my own pattern. I got carried away and just kept knitting. Then I realized I had to do the head so I stopped and thought maybe I could find a pattern on Ravelry. I did find something called Tippees and I decided I would use that as a base for the body.

That third one looks like Darth Vader. I should do a Darth Vader Finger Puppet. Anyway, notice the stitches on them? They were too big. You can see the batting through the holes of the stitches.

So the final body on the right was done with smaller needles, the same needles I did for the Totoros. I think it’s a 4mm or 6 US.

The white face part was harder to do. Here’s a pic of Yakko Warner:

It has that weird shape…

I didn’t have a pattern, so I just made it up, trying to make sure it fit the head. The first time I did it, pictured on the left below, the stitches were too big. So I tried the Strumpstricknadelns of size 0! Huzzah! Things are much tighter! 😀

It kinda looks like a stingray with bunny ears!

So all that’s left now are the arms and then I can start sewing this baby together! I’ve been procrastinating because I’m not looking forward to the “sewing it to each other” part. If my skills with stitching eyes is any indication, I’m going to destroy it! I still don’t know how I’m going to do the arms. I don’t know how to make little white balls for the gloves. If anyone has a pattern for me to copy, please do tell!

One final aside. My eldest daughter saw me sizing up the white faceplate on the finger puppet. She then asked if I was making “No Face” from Spirited Away.

I literally stopped what I was doing. My mind figuratively exploded. My daughter was a genius. After Yakko, I am going to knit as many No Face finger puppets as I can.

Maybe I should make his face glow!!!

So many knitting goals…