HUZZAH! Can you believe that? I don’t know if I mentioned, but I worked on a Totoro to fit around my shaker eggs! I’ve been shakin’ the thing at anyone I can (very few instances where you can do that and not get arrested) and someone wanted me to make them one! Good grief!

Below, you can see “My Shaker Totoro” in action with the Debs & Errol song, “I Wish Totoro Was My Neighbour“.

I knew I should have written down the pattern. Now I have to try and recreate it! I took Brella’s Chibi Totoro pattern, made it a bit larger so the egg will fit in, and then I removed the ‘Short Row Belly Bulge’. I kept most of everything the same though. 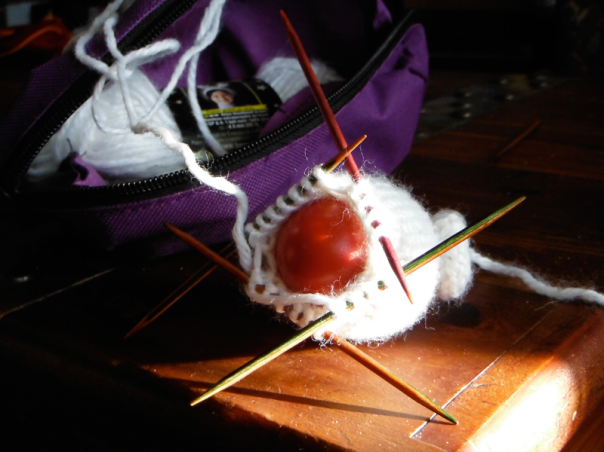 And as you can see, I used Glow In The Dark Yarn.

Have you been wondering where I’ve been? No? Well, the thing is, I’ve been writing songs as you know for FAWM.org. At least, I’ve been doing that in theory. What I have been doing is leaving song comments for people in video form, and instead of commenting on their song, I just ramble on about life while I knit. That’s what I do.

I would show you one of these videos, but I already subjected you to a video of me shaking the thing and really, you don’t need to see more of me shaking any … thing… of any sort…

Anyway, I should be writing music. But I can’t stop knitting. Here’s my desk where I record the music: 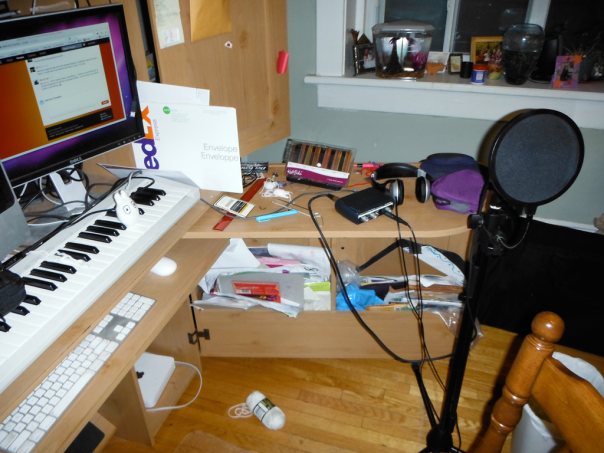 This could be a game: how many knitting related things can you find?

I’m just so excited about knitting Totoros. I need to get them done before the Con which is in two weeks. I don’t think I’ll get done.

While we’re talking about music, I played at a Filk circle this past weekend. I brought my knitting. But let’s make this less about me and talk about a fun knitting song I heard! Huzzah!

It’s called “Can You Knit, Brave Boys?” by Talis Kimberley!